Due to the freezing temperature in winter seasons, some people would prefer to take shelter inside houses where fireplace can warm the body. These houses are commonly built made of either wood or concrete.

But not for the Inuit people. The Inuit people constructed homes and villages using snow. Yes, that’s right, snow. Why would anyone create a shelter in the tundra region using snow? Because a snow shelter is surprisingly warm inside. The most popular ice shelter is the igloo. However, there are other types of ice shelters such as the quinzhee and snow caves.

The igloo (fig. 1) is the customary haven of Inuit living in the far northern districts. Most people would picture an igloo as a dome shaped structure made entirely out of snow blocks. However, an igloo doesn’t have to be made out of snow blocks.  The word igloo (or iglu) traditionally means a house made of any type of materials [cite]. 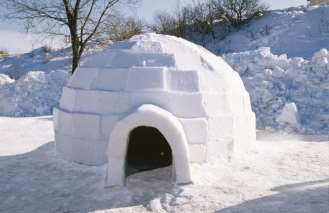 The popular type of igloo is constructed using snow blocks in a round frame in which the walls bend into the center tow°rd thÐµ toÑ€ to Ñ•h°Ñ€Ðµ ° Ñ•now v°ult in which the angled roof can support itself. Usually, the entrance of an igloo is shaped like a tunnel and located at the bottom of the structure. The igloo usually has a small hole on the top that serves as ventilation.

A warm shelter made of ice

An igloo, even though made completely out of snow blocks, are surprisingly warm inside. But how is it possible?

The secret behind an igloo’s warmth lies behind the materials used to construct it. Igloos are typically constructed using packed snow molded into rectangular blocks. These blocks are then stacked around a cavity. After the blocks have been placed, the cavity would then be uncovered. Usually, igloos do not have a flat surface, rather it is structured into different levels (fig. 2). The reason for the unlevel surface is because air becomes denser the colder it is [cite]. Due to the difference in density, the cold air inside the igloo would clump together in the lower level of the igloo forming a cold trap. In other words, the igloo is built based on the principles of physics. While outside temperatures may range to -49.0 °F, the insides of the igloo may be as warm 61 °F [cite].

The igloo is a dome shaped structure that can be built using blocks of snow inclining toward each other. The snow blocks are usually polished to completely seal the walls and the finished structure doesn’t need any additional supports. If the igloo is built correctly, it should be able to withstand the weight of an average adult male standing on the top of the igloo [cite]. For a bigger igloo, the snow blocks are first lined up to shape a vertical wall rather than an arc. The structure is built by stacking the snow blocks in a spiral form as shown in figure 3. After the first row, more blocks are stacked on top of them forming an upward spiral, creating an arc that results in a self-supporting dome [cite]. It is not recommended to use fresh snow to build an igloo. To build an igloo, the snow used must have enough density so it can be stacked appropriately. When in use, the inside the igloo is typically warm enough to cause the inner walls to melt slightly. When the igloo is not in use, the melted snow will refreeze and develop a layer of ice that adds to the strength of the igloo. Given enough time, the igloo becomes a house of ice rather than snow.

The igloo is commonly built in three different sizes for different purposes [cite]. A smaller igloo is typically built as a temporary shelter when hunters are out on the land or sea. The medium sized igloo is semi-permanent, and usually houses one or two family. There are often a number of medium sized igloo in an area which forms a small village. The larger igloos are usually two igloos connected through a tunnel, with one building used for events and the other to live in.

A quinzhee (fig. 4) is a snow shelter made by digging out a pile of snow, creating a hollow area. Usually, a quinzhee is constructed only for temporary use, unlike an igloo which is semi-permanent and made using snow blocks. The word quinzhee is of Ðth°b°Ñ•k°n origin [cite].

A snow cave (fig. 5) is a type of ice shelter built by digging through snow. Using the same principles as an igloo, the entrance of the snow cave is built lower than the main area to trap warm air in the main area, and like a quinzhee, is only for temporary use. Even though outside temperatures may be as low as -40°F, the inside of a properly made snow cave can be as warn as 32°F [cite].

A glacier cave (fig. 6) is a special kind of ice shelter as it is not made by human hands. Most glacier caves are created by water running through or under the glacier [cite]. The running water usually comes from the melting surface of the glacier, entering the ice at cracks which enlarge after some time, both by erosion and melting. Due to global warming, many large glacier caves have disappeared as glaciers around the world melt [cite].

Ice structures, unfortunately, also comes with risks and dangers. The risks of these dome shaped ice structures include the dangers in ventilation, and structural integrity. When an igloo is made with a diameter of 10 feet or bigger, it has to be built in a perfectly shaped dome otherwise it will collapse. The quinzhee is more prone to collapsing than an igloo. Because of the warmth inside the quinzhee, the inner walls of the quinzhee would melt. Since a quinzhee isn’t built from sturdy snow blocks like an igloo, it is very likely to collapse which may cause death.