Eucumbene Dam, located in south east New South Wales was constructed as part of the Snowy Mountains Hydro Scheme. The Snowy Mountains Hydro Scheme commenced under an act of Federal Parliament passed the Snowy Mountains Hydro-electric Power Act in 1949 which commissioned the diversion of the Murrumbidgee, Snowy and Tumut Rivers in south western New South Wales into various dams which could then provide 2360 gigalitres of water for irrigation of the western side of the Great Dividing Range. As Australia is one of the driest countries, this project was developed to minimise the effects of drought on agriculture while also generating hydro-electric power.

The scheme was chosen to be implemented in this location due to the favourable climate for regular precipitation. The Snowy Mountains region is one of the wettest in Australia with precipitation varying from 1000mm to 1500mm compared to the entire Australian average of 419mm (2019) (Bureau of Meteorology 2016). Due to the construction of this project in a mountainous area, the rain shadow effect aids precipitation occurring above dam areas. The mountains provide a natural barrier to the prevailing winds from the east, causing the clouds to rise and cool, in turn causing moisture to fall as rain or snow and be collected by the dams. As of November 2019, the Snowy Mountains Hydro Scheme provides irrigation for approximately $3 billion of agricultural goods and provides 32% of eastern mainland Australia’s renewable energy. (Snowy Hydro 2019)

Eucumbene Dam has a height of 116.1m, crest length of 579,1m and a base width of 686m, allowing it to have a capacity of 4,798 giga litres, making it the largest of the sixteen major dams within the Snowy Mountains Hydro Scheme. As the central storage unit, Eucumbene Dam stores the waters of the Eucumbene and the upper Murrumbidgee Rivers which can be diverted through either the Eucumbene-Tumut Tunnel or the Eucumbene-Snowy tunnel. The purpose of both of these tunnels is to transport water to reservoirs which then through other tunnels get pumped to the turbine driven power stations.

The Snowy Mountains Hydro Scheme had a total project cost of $820 million, equivalent to $14 billion AUD in 2019, and was constructed over a 26-year period between 1949 and 1974. Eucumbene Dam however was constructed between May 1956 and May 1958 at a cost of $38 million, a value worth approximately $660 million in 2019. Of the twenty-seven contractors who build parts of the scheme, a joint venture between Kaiser-Walsh-Perini-Raymond built Eucumbene Dam. (Snowy Hydro Limited, p.158-160) As designed by the four American contractors and shown in Figure …:, Eucumbene Dam is an Earthfill Embankment dam, meaning it is a “dam built up by compacting successive layers of earth, using the most impervious materials to form a central core and placing more permeable substances on the upstream and downstream sides” (Encyclopaedia Britannica 2019). By ensuring the core of the dam is constructed with an impervious material, seepage of water through the dam is eliminated, ensuring the dam maintains its structural integrity. As depicted in Figure …, Eucumbene Dam features an Earthfill centre core with a volume of 3,810,800 m3, Filter layer with a volume of 1,088,300 m3 and an outer Rockfill with a volume of 1,836,200 m3, which protects the inner earthfill core. Therefore, the total finished volume of material incorporated into the construction of the project was 6,735,300 m3. (Snowy Hydro Limited, p.3)

The first construction process to build Eucumbene Dam was site clearing and excavation to the foundation level. This first aspect involved site preparation where vegetation was removed so that the ground could be levelled, allowing construction equipment to operate efficiently when perform subsequent tasks which included excavation down the design foundation excavation line (as shown above in Figure X). Dozers were primarily used to clear the site due to their ability to use both their blade to clear trees and their ripper to break up the ground so that the roots of vegetation could be removed. Excavators and spoil trucks were utilised to remove excess material above the design foundation level.

The second major construction process involved with building Eucumbene Dam was quarrying. Quarrying is the mining and classification of earth materials in accordance with the design specifications for the earthfill core, filter and rockfill sections to be used to construct the embankment dam structure. The equipment used for this task were a combination of excavators and loaders. The excavators were used to obtain the soil from the quarry due to their ability to excavate below ground level and the loaders were used to load stockpiled soil into the trucks

The hauling of earth and rockfill materials obtained from the quarry was completed by dump trucks due to their relatively high speeds and high-volume capacity, allowing for the cost and duration of hauling to be minimised.

After the soil had been dumped by the trucks, it was then spread evenly by Motor Graders and then compacted to the specified design requirements to prevent the seepage of water through the dam wall, which if not completed would increase the rate of erosion and compromise the structural integrity of the dam. Specifically, a sheepsfoot roller was used for this process due to its properties of compacting by kneading and pressure, suiting the sand with clayey fines composite material which was used, and compacts best under these forces.

Due to the large quantity of material used to construct the dam which was readily available in close proximity, an earthfill embankment dam may still be the most viable type if this project was constructed in the present due to the material being much cheaper than concrete. However, the major construction process of Embankment Construction has changed over the last sixty years due to the technological changes of the equipment used, the understanding of material properties and how to use these materials more efficiently.  As stated in the previous section, the four main construction equipment involved in this process are dump trucks, dozers, motor graders and rollers.

While no major new types of equipment would be used to complete this project in the present, the technological advancements made for each type of machinery has greatly increased the equipment’s production rate, meaning the project today would  be completed in a shorter time period, with less equipment and therefore at a reduced overall cost.

The greatest development in the last sixty years which has changed how this construction process operates has been the increase in capacity and reliability which increases the production rate of these four pieces of equipment. The primary increase in production is due to the increase in power of these vehicles, allowing for higher volumes to be transported to the required location. As the production rate for a dump truck is based on the number of cycles it has per hour (based on the load time, haul time, dump time and return time), the volume of the tray capacity and the efficiency. Modern dump trucks when compared to the truck such as those in Figure …, when compared to the truck shown in Figure …,  have much greater carrying capacity and greater engine power and therefore greater speed, therefore increasing the production rate of hauling while also reducing costs and the time taken for material to be transported.

In the same way, technological advancements which have made dozers more powerful, in turn have facilitated a decrease in the time for passes to be made and increased the volume capacity of the blade.  While the construction process of spreading the soil which has been dumped from the trucks to the desired location has not changed, the construction process has been made more efficient due to the increased production rate of this vehicle.

The optimisation of motor graders and rollers has also improved in the last 60 years by increasing the key components which determine the production output of these pieces of machinery.

A technological innovation that has increased the rate of production of Motor Grader is the introduction of GPS technology which provides the operator data to ensure that specified grades and thicknesses of the soil layer are achieved before the process of compaction commences. Rollers have increased in their production rates by combining the tracking ability of GPS technology with advanced depth sensors. By combining the GPS’s ability to track where the vehicle has travelled and the depth sensors displaying to the operator if the soil is soft, compacted or damaged, records of compaction can be obtained, saving time throughout the construction of the earthfill core.  (McDaniel 2012).

Due to the impervious soil’s composition of sand and clay, the most optimal roller if this process was constructed in the present would be a sheepsfoot roller due to clay being best compacted by pressure and kneading. While sheepsfoot rollers were used when Eucumbene Dam’s embankment was constructed, the thickness of a sheepsfoot roller’s compaction was limited to approximately 150mm. This has since been increased to 400mm (Fell, MacGregor, Spaledon 1992, p.465-466) through optimising the lug design and drum weight. As the earthfill component of the dam has a volume of 3,810,800m3, these advancements by optimising the pressure applied by the roller would reduce the time taken for compaction by over 2.5 times. 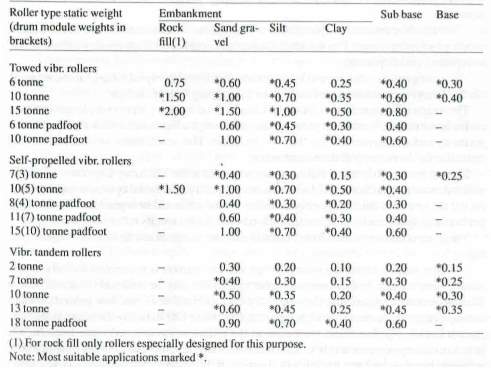 A second way that the embankment construction process has changed is by increased research into the properties of soils and the optimal particle size gradation, layer thickness, water content and density ratio. By understanding the optimal conditions for clay and sand, random testing can be done in either random locations or those judged to be least likely to meet specifications. (Fell, MacGregor, Spaledon 1992, p.468-469). The continual monitoring of the earth material properties (which vary), ensures construction equipment can be operated at the optimum parameters for the material, increasing the quality of the embankment and reducing the project’s duration.