Climate change is a major world issue, average temperatures have risen across the globe by 1oC between 1906 and 2005 with a more rapid increase over the last 50 years (Conserve Energy Future, 2017], this rise has been attributed to global warming (McGrath, 2017). Emissions of gases such as carbon dioxide (CO2) and Methane (CH4) contribute to this global warming and are known as greenhouse gases (NASA, 2017), though the Environmental Protection Agency in the United States of America stated in 2017 that CO2 was not a primary contributor to global climate change (McGrath, 2017).

Energy use is a major producer of these greenhouse gases, governments around the world have put in place measures to reduce the production of these gases by introducing rules to improve energy efficiency (Conserve Energy Future, 2017].

In the UK energy use, can be broken down into 4 main areas, Transport, Domestic, Industrial and Services Sector (Department for Business, Energy, and Industrial Strategy, 2016).

This report will look at energy usage of buildings and techniques that can be utilised to improve a buildings energy efficiency.

The breakdown of the UK’s energy usage across the 4 main areas in 2015 was as follows (Department for Business, Energy, and Industrial Strategy, 2016): –

The fuels used to provide this energy were a mixture of Gas, Electricity, Solid fuels, Petroleum and Bioenergy (Department for Business, Energy, and Industrial Strategy, 2016). Both industry and transport use large amounts of energy undertaking their processes be it production lines or the operation of various modes of transport such as trains or buses rather than the running of buildings (Department for Business, Energy, and Industrial Strategy, 2016).

Energy usage is fundamental to the operation of any building be it for lighting, heating, cooling, cooking or other services such as lifts (Wade, Pett and Ramsay, 2003), with most of this energy being provided by either gas or electricity (Department for Business, Energy, and Industrial Strategy, 2016). Thus, Improving the energy efficiency of a building can considerable reduce the amount of energy that is used.

Over the last 30 years there has been a considerable increase in energy usage by office blocks due to the rise in the use of technologies such as large computers and the increased use of air conditioning systems (Wade, Pett and Ramsay, 2003). In the service sector office buildings are second to retail units in the levels of energy that they consume, and these office buildings contribute to 1.1% of the UK CO2 emissions each year (Pothitou, Connaughton and Torriti, 2015). 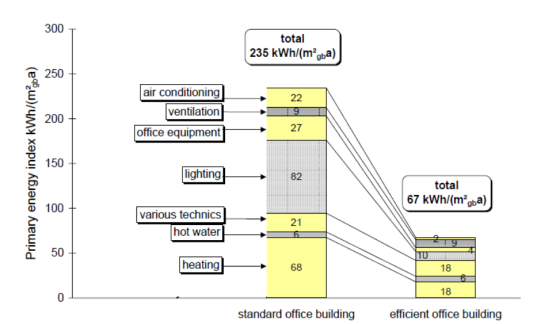 To become more energy efficient a building needs to use less energy to undertake the same tasks or role (International Energy Agency, 2017), as figure 1 above shows, improvements from a standard office block to a super-efficient office block can reduce energy usage by 70% (Knissel, 1999)

For a building to become more energy efficient attention needs to be paid to the lighting design to reduce the level of usage, technological advances mean that improvements in the efficiencies of lighting can be done in several ways (Energy Saving Trust, 2017), some of these can also be applied to existing office buildings without too much work having to be undertaken other methods need major alterations to incorporate into older buildings and are more suited to new buildings or buildings going through major refurbishment (The Renewable Energy Hub, 2016).

This method of energy efficiency can be applied to existing buildings without too much trouble but does have a cost over and above normal maintenance costs of changing the lamps but by the energy saved the LED lamps can pay back their extra initial cost within 3 years. (Corkhill, 2014).

Another area where lighting can be made more efficient is insuring that it is only used when required and that lights are turned out when not in use (Open Technology, 2016). The use of sensors such as proximity or absence detection also means that the lights come on automatically when occupied and turn off after a period of non-occupancy (Open Technology, 2016), the dis-advantages of this can that someone sitting still at a desk may not activate the sensor and the light may go out while they are still there.

Office areas can also be divided into different lighting zones with different controls for each zone, lights then only need to be on in areas of the office that are occupied or being used (Knissel 1999) leading to further efficiency.Â  The use of daylight sensors to adjust the amounts of artificial light used when there is sufficient natural light helps reduce energy usage (Carbon Trust, 2017). This may be achieved by having lights that either switch off or dim depending on levels of natural light in an area and can be used alongside lighting zones so that the lights closest to the windows dim separately when the natural light levels increase (Open Technology, 2016).

Dimming controls and timers can also be utilised to minimise energy usage, it may be that less lamps operate at a lower light level at certain times of the day such as during the evenings or night while cleaning of the office is being undertaken (Open Technology, 2016).

The room layouts can also play a part in energy efficiency by positioning desks to make more use of natural light and by painting walls and ceilings light colours can maximise the effectiveness of the lights (Irish Energy Centre, 1995).

All individuals working in an office want to feel comfortable and not to be either to hot or too cold no matter what time of the year it is (Seton, 2015). There are 6 factors which can affect the thermal comfort of people within an office environment, these can be broken down into environmental factors and personnel factors (HSE, 2016). The 4 environmental factors being Air Temperature, Air velocity, radiant temperature and relative humidity (Harish, 2017), the other 2 factors are personnel these being clothing and metabolic heat (HSE, 2016).

The Chartered Institute of Building Services Engineers (CIBSE) have identified several elements of a building that will affect the thermal environment these being items such as glazing, ventilation, air tightness, thermal mass, plant and equipment, waste heat along with working patterns, activities and workforce profile (Seton, 2015).

CIBSE also provide recommendations on the temperatures levels, air supply and illuminance to provide a comfort level that will be acceptable to 80% of the occupants (Woods, 2015), this does though mean that there will be 20% that do not find it comfortable (Woods, 2015). Due to personnel preferences, it is not possible to find settings that are acceptable to all occupants and the recommendations are levels deemed to be a healthy office environment (HSE, 2016)

Many office blocks have heating, ventilation and air conditioning systems (HVAC) to maintain these comfort levels (Carbon Trust, 2017), figure 1 earlier in this report shows that in a standard office these systems use up to 42% of the all the energy consumed by the office block (Knissel, 1999). For the most efficient use of these HVACs systems it is important to design the buildings fabric to reduce the load imposed on these HVACs systems (Harish, 2017). For example, radiant temperature can involve both heat gain and heat loss through the structure, this is especially so near large windows, in these instances the structure can be designed with solar shading such as brise soleil or reflective blinds on elevations facing the sun to reduce solar heat gain (Harish, 2017). The windows can also be designed with triple glazed glass along with blinds that have thermal insulating properties to help reduce heat loss during the cooler months of the year (Harish, 2017). These measure help reduce the amount of work that either the cooling system or heating systems must undertake (Knissel, 1999), the disadvantage that any shading or blinds have is that they reduce the amount of natural light entering the building leading to the extra usage of artificial lighting.

Heating in office buildings is usually provided by a central boiler (CIBO, 1997), the efficiency of the boiler can depend upon the fuel used, back in 1997 the typical energy efficiency for boilers based on fuel varied greatly as shown in figure 3.

Improvement in technology has meant boiler efficiency has greatly improved since 1997, micro combined heat and power (mCHP) boilers are now available for offices and domestic properties, prior to 2006 these were only economically available on extremely large scales (The Renewable Energy Hub, 2016). CHP boilers simultaneously generate useful heat and electricity making better use of the fuel being used (Ecoliving, 2017).

These combined heat and power boilers can be up to 98% efficient, with the electricity produced being either used by the building or returned to the main grid (The Renewable Energy Hub, 2016). A disadvantage of CHP is that it is only useful in a building that requires both hot water and electricity, if other methods are used for heating and hot water is only used for washing then a CHP is not practical (Dinneen, 2014).

In open plan areas controls to both heating and cooling should also not be accessible to the occupants as there could be instances where one individual turns up the heating in their area and another turns down the air conditioning in their zone and the two systems then try to work against each other (Carbon Trust, 2017).

Some areas of a building such as computer hub rooms will require cooling all year due to the heat generated by the equipment within them (Wade, Pett and Ramsay, 2003), the use of a heat recovering system can be utilised to use this heat for other parts of the building reducing the load put on the heating systems and reducing the energy usage (Energytechs, 2017).

It is though important when considering energy efficiency of buildings services to ensure that comfort levels for occupants are maintained for the tasks they are undertaking and are not compromised to achieve great energy efficiency (Irish Energy Centre, 1995)

Modern technology makes more use of automated controls to assist in improving energy efficiency within buildings, this helps to remove occupant’s interference with controls and the potentially unbalancing of the systems resulting in more energy usage. As already mentioned earlier in this report the guidance figures given by CIBSE will only be acceptable to 80% of the occupants (Woods, 2015) the other 20% will be looking to alter the settings to suit their requirements so good communication with the occupants on the reasons the strategy for control settings will help with the implementation of the energy efficiency measures (Irish Energy Centre, 1995).

Department for Business, Energy, and Industrial Strategy, 2016, Energy Consumption in the UK [Online] Available at: https://www.gov.uk/government/collections/energy-consumption-in-the-uk [Accessed on 14th March 2017]