Earned value analysis is a project control technique which provides cost and schedule performance measurements of the project. It is a frequently used method of performance measurement for projects. It integrates the project scope baseline and the cost baseline, along with the schedule baseline, to form the performance baseline, which helps the project management team assess and measure project performance and progress. EVM provides project managers and the organization with triggers or early warning signals that allow them to take timely actions in response to indicators of poor performance and enhance the opportunities for project success. Better planning and resource allocation associated with the early periods of a project might be the cause of this reliability.

EVM can be used for progress payments to contractors based on the earned value (EV) of contracted or outsourced work. Since such contractual arrangements create legal and financial obligations, it is important to consider the method specified for evaluating progress. These methods and tools for the determination of progress should be carefully considered and negotiated to achieve a fair and equitable environment that encourages successful accomplishment of contracted or outsourced project items.

Once a project has advanced to a stage of performance, the consistent and constant flow of information on the true status of the project is essential. EVM is a methodology that associates project scope, schedule, and resource measurements to analyse project performance and progress. The fundamental principle of EVM is that the patterns and trends of performance, when compared against a soundly developed baseline, can be excellent predictors of the future project performance. Feedback is critical to the success of any project. Getting the relevant feedback in time enables project managers to identify problems early and make adjustments that keeps a project on time and on budget. EVM is considered by many to be one of the most effective performance measurement and feedback tools for managing construction projects.

In EVM system, the three parameters that influence the project performance control are:

Planned value (PV) is the sanctioned budget assigned to a scheduled work. It may also be known as the Budgeted Cost for Work Scheduled (BCWS). This budget is allocated by phases over the life of the project, but at a given moment, planned value outlines the physical work that should have been accomplished. The overall PV is sometimes referred to as the performance measurement baseline (PMB). The total planned value for the project is also known as budget at completion (BAC) [1].

Earned value (EV) is the measure of work performed at a specific point in time, expressed in terms of the authorized budget for that work. The EV being measured needs to be related to the PMB, and it cannot be greater than the authorized PV budget for a component. The EV is often used to calculate the percentage completion of a project. Progress evaluation criteria should be established for each work breakdown structure (WBS) component to measure work in progress. The earned value methodology used to plan the baseline should be used consistently to determine the earned value. Project managers monitor EV, both incrementally to determine current status and cumulatively to determine the long-term performance trends [2], [1].

Actual cost (AC) is the realized cost incurred for the work performed during a specific time period. It is the total cost incurred in achieving the work that the EV measured. In order for EVM analysis to be reliable, AC must be recorded in the same time period as EV and for the same activity or work breakdown structure component as EV. Fig. 1 shows the actual cost at time now, and indicates that the organization has spent more than it planned to spend in order to achieve the work performed to date. 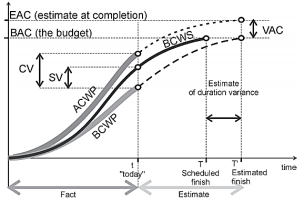 Fig. 1 Earned Value curve for a project over budget and behind schedule

Previous researches done on the EVM indicate that it is definitely one of the better practice to monitor a project. Therefore in this project we will be considering Earned Value Analysis for research purpose.

As the project progresses, forecasts can be developed for cost and schedule performance. Common forecasting data includes:

EVM AS IT RELATES TO PROJECT MANAGEMENT SITUATIONS

The study of various research works and case studies give an idea that Earned Value Analysis is a great monitoring system for project cost control. Therefore, in this paper I will be making an attempt to apply and analyse the use of EVM on a live project based on the findings and guidelines of the references.