Excavate total area to required depth 150mm and remove all waste from site,
Excavations are generally undertaken using the correct machines (8 tone digger)was used for this job. And the work undertaken is to excavate the required area to the correct depth dependent on the specification being used, however there are many specifications for different applications, generally domestic footpaths excavate virgin ground to a depth of 160mm for new applications.

But for this job there was crush already down so we excavated 160mm to 170mm to give some tolerance to put the shutters in. Next we used a small whacker plate for 7 passes to compact a solid base for the concrete.

To form falls and cross falls to assist water escape. We took a level to the top of the step and the last level to work out the difference between them to get your fall which ours was 53mm. This is within tolerance for our specification.

After the shutters are in place we placed down DPM to stop moisture spreading into the concrete. Secondly we cut steel mesh so it fitted in but with an extra 50mm cut off each side to have sufficient cover to stop the concrete from rusting, also with a 50mm spacer for it to float in the middle. Once the concrete was poured in the vibrating poker is used all around the area to prevent any voids being left in the concrete. Next the concrete tampered down to help compaction it allows the 20mm aggregate to sink. So when you come to float it’s easier to get a smoother finish. Lastly we finished the concrete with arris edges and a broom finish before leaving we covered the concrete with polyene to prevent weather condition harming the concrete.

We were responsible for setting out the footpaths accurately to line and level in the dimensions that we were given that the instruction supplied, and arranged.

All soil including old concrete paths shall be removed from the site and the area kept neat and tidy to ensure minimum obstruction to traffic ways during the course of the work. No stockpiling of excavations shall be left on verges.

We use existing crush that was underneath

Formwork may be of either steel or planed timber and shall be fixed so as not to flex or displace during concreting operations. Formwork shall be of dimensions equal in depth to the thickness of the concrete to be poured.

1.4m cubed Ready mixed concrete with a slump of 125mm, Maximum aggregated size shall be 20mm, Sand shall be clean, sharp, washed from a river or quarry sand, free from silt and organic matter.

We found out that weather condition is a factor we had quite a lot of rain during the time the concrete was curing. Therefore it took longer for it to set so we were rushed for time so when we came to put a brush finish on it was still too wet so the finish isn’t as neat as it could be. So in future we should check the forecast prior to work.

We could count for rain by putting a gazebo up prior to working.

We also originally add more water to the mix which didn’t help with the time consumption. So we shouldn’t off added more water that would of set more rapidly. 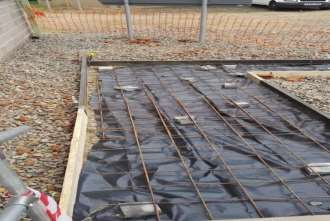 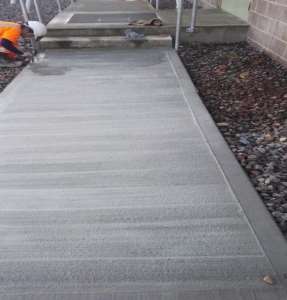