Lithium batteries are used in our phones, laptops and in a number of cars. Companies are directing towards large lithium-ion batteries as a means to “store energy from solar panels” (Schneider, 2019). An increasing demand for an electric society. The daunting realities of global warming has become a large problem. The lithium battery has its advantages but is not sufficient to provide an industrial use in the  transportation sector. There are many problems with lithium batteries such as its capacity. Therefore, Silicon anodes are being perceived as the next step in lithium-ion batteries. The capability for silicon to be able to intake charge results in a long lasting and more compact battery (Science News, 2019). Although lithium ion batteries have a high density which gives them an important role in the storage sector, this technology has reached its theoretical capacity (Zhu, 2019). Silicon is a strong alternative to graphite due to its “high capacity”. Having a low “discharge potential (∼ 370 mV)”, makes it a good fit for high-power applications (Szczech, 2015). Silicon nanowires have been very encouraging as it allows for “high capacity and long cycle life anodes” (Wang, 2017).

Nanostructured silicon seems a strong candidate for high capacity anodes. Silicon’s capacity is exponentially higher than the normal graphite anodes. Having said that the “large volume change of silicon during lithiation and delithiation” as well as poor cyclability has inhibited the widespread application in industry. Capacity loss can occur due to SEI formation and a stable cycling with a small amount of capacity fade. This explains why capacity loss is linked to the expansion during the process of lithiation/delithiation. Electrode pulverization can cause “lithium trapping in the active material, loss of electrical contact”, with large consumption of material as a consequence of electrolyte exposure in the  expansion phase. All of these factors contribute to low Coulombic efficiency. (Jin, 2015). In brief, the challenge is the ability to increase the Coulombic efficiency which will intern increase the capacity of lithium batteries.

Nanoscale electrodes could be made with a particular form of shapes like nanowire arrays or in a mesoporous shape which will provide result in the right amount of free space needed to allow for  expansion, and therefore reducing the material stress achieving higher “reversibility and cycling stability”. The centre of the stress suffered by the material during lithiation/delithiation is dependent on morphology which is the shape and structure. (Szczech. 2015). Silicon nanotubes are showing large amounts of discharge with stable cycling over a sustained period, with capacities reaching values of 3400 mAhg. Nanotube-based electrodes will allow for material expansion during cycling period (Figure 1a), forming a current pathway directed into the nanotubes. This facile strain relaxation which is the result of the small diameter of nanotubes as illustrated by the partially coating of silicon nanotube with “electrochemically-inactive nickel”. TEM images show the nanotube in both phases – before cycling and after, with the results showing the nanotube deformed without fracturing (Figure 1b–1c). The ability for silicon nanotubes to change shape without fracture pushes forward the agenda of a  high capacity battery. Capacity losses were recorded at 38% during the first phase of the cycle in silicon nanowires (ibid).

Nanocomposites which have some amount of silicon nanowires with carbon layers, silicon containing layers of carbon nanotubes, and silicon layers of metal oxide nanotubes were tested on for the chance to improve the strain relaxation and to reduce the reaction of silicon with other electrolyte and to avoid the potential of SEI formation. Rays of “thin crystalline silicon nanowires (∼ 6.5 nm diameter)” with carbon layers (Figure 2a) have displayed visual representation of the first capacity with values reaching 3163 mAhg−1, and a “87% capacity retention after 80 cycles at C/5” (Figure 2b) (Jin, 2015).

The retention of current shows a level of high capacity, which further implies that the carbon layer was up to a tolerance during the cycling phase, inhibiting the addition of other reactions between silicon and the electrolyte. “Carbon-coated silicon nanowires with diameters ranging from 20–300 nm” are showing a lower capacity with a value of 1326 mAhg after 40 cycles. CVD breakdown of silicon onto carbon nanotubes had high yield cycling, with the capacity value suggesting a “1650 mAhg−1 after 50 cycles”. Moving on to SnO2 nanotubes, the layering of the inner surface of the tube displayed a capacity of “1600 mAhg after 90 cycles” in comparison to the 400 mAhg value when it was a unlayered nanotube. The large capacity shows that the space can increase the efficiency of the nanotube layered silicon (ibid). Figure 2. (a) images of the synthesis of Silicon and carbon centre with nanowires using different shapes. (b) Capacity and Coulombic efficiency of carbon layered silicon nanotubes.

The research informs us of the efficiency of lithium battery after the addition of silicon nanotubes. This concluded in the efficiency being increased from 38% to 99%. The graphs below display how cell potential and the efficiency changed over ‘x’ period of cycles. 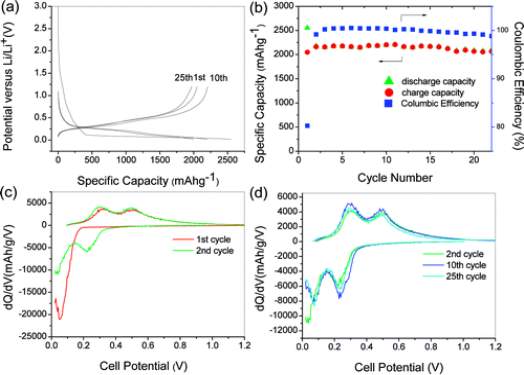 The differentiation of certain efficiencies and their capacity in respects to the number of cycles of silicon nanotube can be seen in Figure 5b. The values of the initial discharge/charge capacities were “2552 and 2049 mAg−1, with an initial Coulombic efficiency of 80.3%”, in addition to the capacity loss of 19.7%. the cycles that follow had an efficiency which reached 99% with remaining stability. Furthermore, the anode was kept at a consistent cycle which display a “fade rate of ∼0.15% over 25 cycles”. The data obtained over 100 cycles from silicon nanotubes suggested a fast “fade in capacity from 25 to 50 cycles (∼1.3% fade between 25 and 50 cycles)”. The specific capacity of silicon anode remains “∼1000 mAh/g at the end of the 100th cycle”. This retention shows a very strong vertical development of Silicon hybrid nanotubes (Kumta, 2017).

The research conducted mentioned in this case study has given a strong representation that silicon anodes are more advantageous over the normal anodes which are used in lithium batteries. However, having said that the most important obstacles which need to be solved before even the consideration of the widespread use of silicon anodes to be used in practical stance are the following: the shape has an huge influence and an huge result on the cyclability of the silicon nanotubes. Majority of “electrodes fail within a few charge/discharge cycles due to the extremely large volume change that occurs during lithiation and delithiation”. Small sixed, unique shapes can revolutionise the ability to obtain longer cycling. Another problem being the stress load and development of a stable layering among the cycling phase needs to be overcome (Jin, 2015). If these problems can be solved like it was observed during the long cycling lifetimes in lithium batteries with the use of nanotubes silicon layer to encourage the process of relaxation of stress and strain during expansion linked with lithiation. Also, the development of SEI layer that has a high tolerance in respects to silicon expansion and the prevention of cracking (Wang, 2017). If these conditions can be met in lithium-ion batteries both the efficiency and capacity of lithium batteries will increase.