In this case study, a brief overview of railway structure is discussed. Defects related to rail failure are considered essential to frame out the correct maintenance strategy. As it is closely associated with safety of passenger and cargo transportation, hence it retains high risk in terms of human lives and cost of resources. There will always be some risk associated with collisions and derailments but it can be reduced by eradication of the root causes. Exposure and amendment of rail defects are major issues for all rail companies around the world.

There are challenges to the infrastructure maintenance individuals to perform effective inspection and cost effective rectification decisions. If addressed properly these can reduce potential risk of rail breaks and derailments.

Risk assessment and Failure mode avoidance has become a vital constraint for the organisations to decide a cost effective and improved solution that could meet the financial constraints regarding inspection, renewal and replacement of rails and wheels. This study aims to reduce costs and risks related to rail operation by effective approaches. The issues and challenges related to rail maintenance are outlined. The maintenance strategy followed by most railway companies is also defined.

Large Railways infrastructures are the prime manner of transportation in several countries. Improved and better safety measurements are continuously presented but still could not be considered as incidents proof. There will always be some risk related with derailments and other occurrences such as major disruption to services, which can furthered be minimised by detailed examination of the root causes. Some of the causes require improvement in skill and efficiency, for example human error, and some may be improved by optimization of inspection regularity. Therefore, a appropriate thorough study of the defects which develop both on the rolling stock and rail infrastructure is vital to frame out the correct maintenance approach. European Union spends around â‚¬ 2 billion every year for maintenance and repairing of broken rails (European Commission - Cordis, 2017). It is understood that the consequential cost due to derailment decreases with rise in inspection, lubrication and grinding charges. Risk in railways could be expressed in terms of cost, loss of human lives, infrastructure unavailability, traffic delay and environmental impact which may be caused due to derailment of a train carrying hazardous material.

In this report, different kinds of rail defects and maintenance procedures followed are described. Different risk assessment and failure mode avoidance methods and tools have been discussed briefly in this report. Some of the issues and challenges related to rail maintenance are also addressed with an aim to reduce the total cost and risks associated with rail operations.

Rails are longitudinal steel members that accommodate wheel loads and distribute these loads over the sleepers or supports, guiding the train wheels evenly and continuously. It is one of the most important components of the track structure. Usually a flat bottom rail is used in conventional railway track, which can be separated into 3 parts: rail head, rail web and rail foot. Many standards are used for rail profiles. (Kumar, 2007) Figure 1 shows the 2 common rail profiles.

The rails must possess sufficient stiffness so that they can act as beams and transfer the concentrated wheel loads to the spaced sleeper supports without excessive deflection between supports. (Ernest and John, 1994)

Due to economic pressure, there is a world-wide trend to increase axle loads, traffic density and speed to reduce the operating cost and increase the efficiency of railways. Axle loads around the world have increased in general from 22.5 to 32.5 Tonnes in last ten years (Allen, 1999). This has led to increased rate of defect formation in rails. Some of the common defects are described in the following sections.

Shelling is a defect caused by loss of material initiated by subsurface fatigue. Shelling normally takes place at the gauge corner of high rails in curves. An elliptical shell like crack propagates in the subsurface parallel to the rail surface. When these cracks emerge on the surface, they cause the metal to come out from the crack area. It is generally eliminated by grinding. (Kumar, 2007) 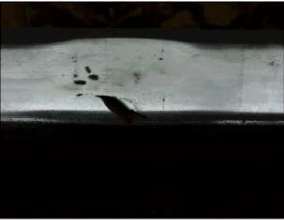 In the crown area, the contact stresses are generally low as it has greater profile radius in comparison to the gauge side of rail. However, high contact stresses are produced on the high rail's gauge corner, which usually has curve radius from 1000 to 1500 m. Head checks are known to occur in tighter (< than 1000 m) curves near the gauge corner of the high rail (IHHA, 2001).

If head checks are not controlled, they can cause a rail break. Grinding is the most common practice to remove head checks. Severe head checks need rail section replacement.

Unlike shelling, squats appear in crown area of straight rail sections. They are surface initiated defects formed by RCF. A squat is formed by two cracks, a leading crack and a trailing crack. Both these cracks propagate in opposite direction. These defects could be prevented by grinding. (Kumar, 2007)

Spalling occurs, when the surface initiated crack development path is intersected by other similar shallow cracks on the rail head area, a shallow chip of rail material falls out. Spalling is more common in cold climates as rail stiffness increases. 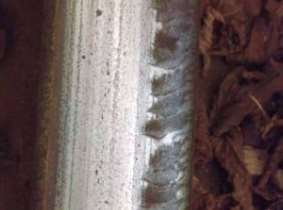 Tache Ovale is a subsurface defect formed around 10-15 mm below the rail head surface (see Figure 4). This is caused by hydrogen accumulation during manufacturing of rail or when poor welding is done in rails. Thermal and residual stresses also contribute to form this defect. 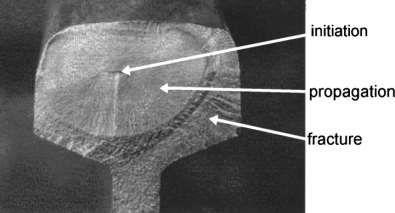 Plastic flow occurs in rail head area, the depth of which may be up to 15 mm. Plastic flow occurs on the field side of the low rail due to overloading. Tongue lipping is also a form of plastic deformation, but it is initiated by surface cracks. These cracks partially separate a layer of material from the bulk of rail. (IHHA, 2001)

Bolt holes appear in the rail web often starting from the fastening point of fishplates. But these become weak points to resist crack initiation. These cracks have a very high potential to cause rail break and needs urgent replacement.

This is a manufacturing defect, which usually appears in the rail web and may extend in rail head also. If this crack is intersected by some other crack, it may lead to an early rail fracture. Odds of sudden fracture due to this become predominant in cold climate.

Transverse crack is mostly developed in the cross-sectional area of defective weld joints. A welding defect may be due to variation in weld material or rail manufacturing defect. Figure 6 shows a Transverse crack develops from the centre of the rail head or the rail foot. Use of clean steel and deeper hardening of rail head may avoid its formation. (Kumar, 2007) 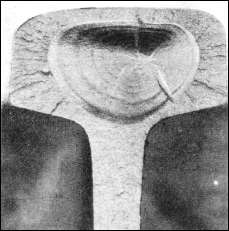 Lateral buckling in rails is a very common defect in which the rail bulges out on its either side due to expansion. As the temperature rises, longitudinal expansion in rail takes place.

Corrugation is a rail flaw consisting of the wave-like wearing of the rail tread visualized as peaks and valleys, in other words, it is a periodic irregularity of the rail surface (IHHA, 2001), see Figure 7. 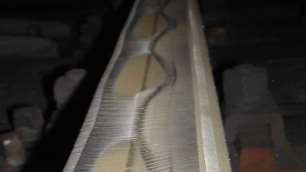 Rail corrugations are the result of a damage mechanism, such as wear etc. Rail corrugations do not pose risk of immediate derailment, but they may be responsible for loosening of rail fastenings, ballast deterioration, increase in noise and vibration level leading to passenger discomfort, etc.

Two main types of corrugations which generally occur in rails are:

Tables below show the percentage and type of defect detection by different rail infrastructure companies.

Rail breaks and derailments can cost the rail players in terms of loss of revenue, property, environmental damage or even loss of life. Estimation of these costs and analysis of risks are important in deciding effective maintenance strategies. In simple terms, risk can be defined as the chance or probability of loss, damage or injury. (Reddy, 2004)

FMEA is a step-by-step procedure for systematic evaluation of the severity of potential failure modes in a system. This process was originally developed in the 1960s, to analyse the safety of aircrafts, but has been since applied to several other fields, including nuclear power plants and the military. (Villemeur, 1992-A)

Figure 8: Schematic representation of the FMEA. (Source: Villemeur, 1992-A).

Risk priority number (RPN) is a methodology for analysing the risk associated with potential problems identified during (FMEA) (for details refer Reliasoft, 2005).

After the ratings, have been assigned the RPN for each issue is calculated as mentioned below,

Rail maintenance issues can be broadly classified into:

Figure 11 outlines the rail maintenance issues. The following sections briefly describe some of these issues. 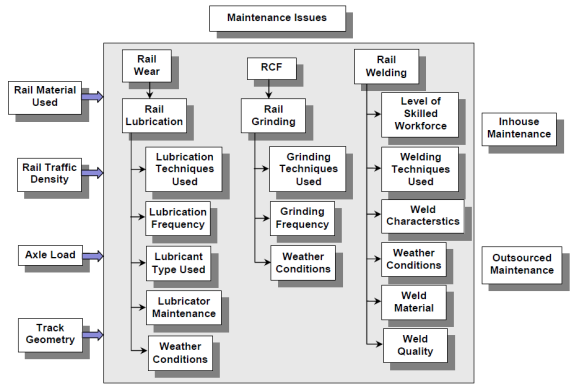 Wear occurs due to interaction of rail and wheel. It includes mild and severe wear. Mild wear takes place slowly but severe wear is often much faster. Severe wear is predominant in curves and occurs dry conditions. Lubrication techniques are used to prevent such wears.

Four commonly used techniques which are followed for rail-wheel lubrication are:

In the late 1990s RCF accounted for about 60% of defects found by East Japan Railways, while in France (SNCF) and UK (Railtrack) the figures were about 25% and 15%, respectively. RCF is a major future concern as business demands for higher speed; higher axle loads, higher traffic density and higher tractive forces increase (see Cannon et al, 2003).

Rail grinding removes surface metal from the rail head. It is done mainly with intensions to control RCF defects and rail wear. Rail grinding became increasingly recognized for controlling RCF defects from 1980 onwards, prior to that it was mainly focused on corrugation removal.

Small imperfection in welds can cause cracks to initiate. A defect free weld requires skilled workforce, better weld material along with improved welding techniques and equipment.

Other important issues are:

In Conclusion, first a brief overview of rail structure is discussed. Then, diverse range of rail defects and degradation processes have been studied. From the literature analyses done, it is interpreted that there is a need for better ways to monitor and predict rail defects over a period based on operational conditions and maintenance tactics. A good knowledge of risk along with an idea of the methods used for risk analysis is also required. Hence, before improvement of any model or any empirical relationship associated with risk and failure, there should first be a familiarity with risk management tools and failure mode avoidance. This study focuses on some such tools.